“The nose will help us to be mindful of possible lies, and to find humor in the seriousness of the ones in power.”

I clock a lot of correspondence with my customers. There is a special bond between a clown and their nose. In between messages about nostril contours, latex rubber, and the birthing of the inner archetype, bits of enlightening details into each other’s lives inevitably get shared. We often become friends. I love this job.

Every clown has a story to tell. That’s why they love clowning. Each performer I meet shows me another aspect of what it means to be a clown. For Mikko ijas, it seems to be a spiritual bridge between what he believes and what all our ancestors also believed. The act of clowning weighs on human history on a scale greater than any major religion or single culture. It comes naturally from the heart of humanity, like music and cooking, and laughter.

Mikko is a scholar. He is kind, and he is full of gratitude. He did not get his degree in physical theater or mime nor study with Philippe Gaulier in Paris. Nor did he spend forty hours a week learning to juggle knives while balancing a bicycle on his chin. He also didn’t spend the eighties touring night clubs and working the stand-up circuit till he hit the big time.
Mikko does, however, study human beings as all comedians do. He was also in a circus-inspired band. Humor and spirituality are two of the most interesting human traits, and Mikko’s daily life seems to exist at their intersection.

I asked him a few simple but specific questions, which he generously answers here—touching on Buddhist philosophy, ancient mythology, Auschwitz, and more. Enjoy.

What kind of clowning do you do?

I carry my nose in my pocket everywhere where I go. It is a reminder for remaining present, right here and now. As a Zen practitioner, I am mindful of how not to dwell in the past and not stress myself with the future. This attitude also involves seeing the world with endless opportunities and empty of my selfish greed and cravings. When we see the world free from our own needs, it becomes a world of opportunities. We have a tendency to diminish our world with our selfishness.

The character of a Clown

The character knows as Trickster is a very common one in mythic tales and in all traditional shamanic religions, including the hunter-gatherers of Southern Africa, which has been the topic of my studies as a researcher of origins of art among the early hunter-gatherer societies.

But I’m also a practicing artist, and the role of a Trickster is very important for that part of my life as well. I see the role of an artist as a jester. A jester can reveal the ugly, hidden truth under the facade of ruling powers and discourse.

The art, at its best, does the same thing. It makes us think differently by revealing the veils of lies cast in front of our eyes. The ones in power will always make us think the way they want, which is only beneficial for their own good. Sometimes this is highly contradictory for the common good. The nose will help us be mindful of possible lies and find humor in the seriousness of the ones in power.

How did you begin doing this kind of clowning?

I began my interest in clowning in the late 1990s. I was in a band that played Eastern European Roma and Klezmer music. The whole show was kinda built into a circus theme. My character as a drummer was a kind of a clown, and my name was Ismail. I did some goofing around with the MC of the band, who was called Mr. Elfgot. He was a dirty-mouthed old circus director and did all kinds of crazy things during our performances. We did some duo acts with him, too, and I was a kind of a silly silent clown. He eventually got angry at me and shot me, and I caught the bullet with my teeth. On one gig, I had this number: I was drinking and smoking a pipe during the show and was supposed to accidentally blow the fire with this extremely strong alcohol. I managed to set my whole arm on fire, but I was lucky to hide my dangerous accident from the audience.

Mikko’s and his family at a ceremony ordaining Maija, his wife, as a lay practitioner to the Zen Peacemaker family.

I renewed my interest in actual clowning when I decided to join the international community of the Zen Peacemaker Order, which is a community of activists who see socially engaged work as a spiritual practice. The Zen Peacemakers founder, the late zen teacher and author Bernie Glassman also started a clown order known as the Order of Disorder (see their precepts at the end of this article). Bernie thought that clowning and Zen have a lot in common and that clowning could help people not to be too serious with their practice. Specifically, his Dharma successors who were leading practices of their own. To learn more, Bernie approached his friend, the legendary clown teacher Wavy Gravy for training. Wavy assigned Bernie a very serendipitous teacher, Mr. Yoowho, a.k.a Moshe Cohen, the founder of Clowns Without Borders USA. Clowns Without Borders is a global organization that has been bringing clowning and circus performances to refugee camps around the world since 1993.

I got my nose from the Red Nose Factory when I got my Ph.D. I graduated with a Ph.D. in prehistoric art and was invited to continue my work as a researcher under the department of Human Evolutionary Biology at Harvard University. Instead of getting that black top-hat, which is the customary thing the doctors get here in Finland, I should get a red nose! I thought that the top-hat represents a distinction and separation from the others. But as there are no “others” in my opinion, I should get a nose, which represents connection. The nose will always get you to the same level with everyone.

The Zen Peacemakers organize an annual week-long retreat at the Auschwitz-Birkenau concentration camp. It is a very powerful place for practice. It really allows you to become sensitive with all the aspects of yourself, including the ones you don’t like so much. During the retreat, we practice silent meditation, interfaith ceremonies, read aloud the names of those killed at Auschwitz, and practice reflection with other participants. It really allows the participants to become aware of the myriad of opinions and emotions shared by this colorful group that decided to come there. It is a very transformative retreat.

During the retreat in November 2017, as I was reading aloud the list of names who were killed, I noticed how many persons named Ismail were killed. Every time I read the name Ismail, I noticed how I was saying the word Smile. I saw how this extremely somber place still reflected humor.

I believe humor is a very powerful tool. Like fear and terror, humor can be used to change the course of things and people’s attitudes. Auschwitz is a powerful place and the first days were very difficult and emotional, but on the last days, love and humor were some of the most important things that arose in me as I was sitting in meditation at the selection site at Birkenau.

I was invited to host the open-mic event on the last evening at Auschwitz, and I just acted on it and improvised a whole event of acts and jokes as a clown called iSmile (pronounced Ismail). 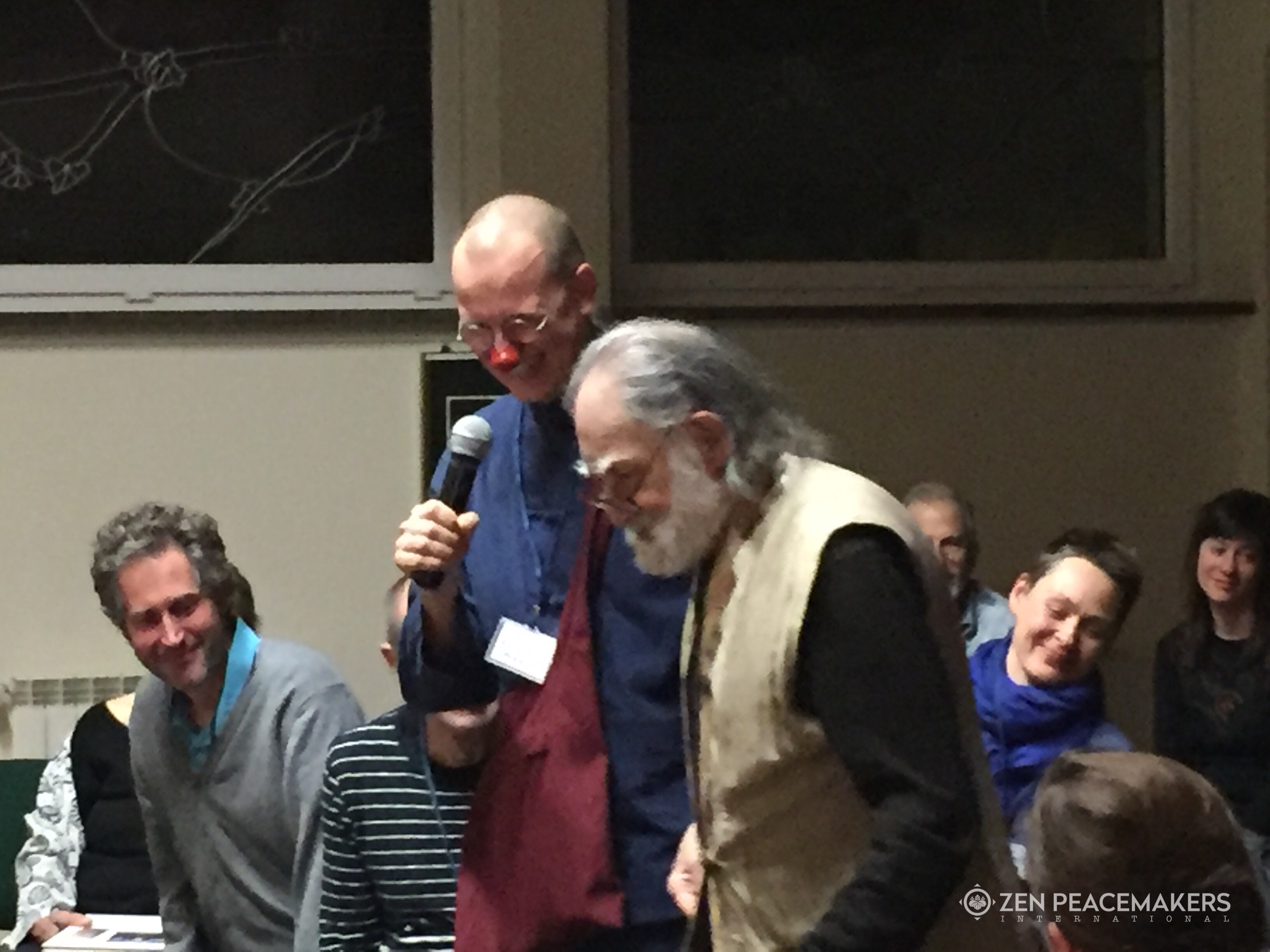 This is Mikko clowning around with Bernie at Auschwitz.

What do you love most about this work?

I am looking forward to deepening this clown aspect of my life. There’s so much to it. I hope to be able to perform as a clown more in the future. I feel that it is a very important thing in this world. Making people laugh, especially kids is very important.

What is the most challenging part of this work for you?

Finding good teachers is always difficult. Training is also expensive. I am trying to get into one of Moshe Cohen’s “Zen and Clowning” workshops in Germany this summer, but let’s see if I can find enough money to participate.

Who do you admire most in your field of clowning? And Why?

I really admire everyone brave enough to put on a nose. It takes a lot of courage to let the nose become alive! The nose is a mask, and it will reveal itself to you if you listen closely. I was mesmerized by the book Impro by Keith Johnstone about ten years ago when I read it. Mainly, I got excited about the parts about masks and how the actor has to become the mask, and how some masks are so powerful that they take you completely. The nose does the same thing. As I put on my nose at Auschwitz and I jumped the stage, I became iSmile. It took me completely, and it was a powerful experience, not to be self-aware, to be fully present at that moment and make an ass of myself.

I also have a tremendous respect towards the Clowns Without Borders movement and all the clowns doing clown care at hospitals. These are the areas that need a lot more clowns.

Mikko in his element, obviously.

PRECEPTS OF THE ORDER OF DISORDER:

The Three Tenants
Not even not knowing
Just wait
Belly laughter

1. Don’t kill anything by taking it seriously

2. Don’t steal anything unless you can get away with it (and you can’t)

3. Don’t worry about promiscuity; no one would look twice at you- you clown

4. Don’t lie by pretending to know anything

5. Forget about intoxicants; you are already a mess

6. Laugh at yourself at least as often as you laugh at others

7. If someone makes a fool of themselves, pay your respects and join in the fun

8. If you can, smile. If possible, giggle. Whenever there is a chance, laugh with all your might.

Keep up with latest news, products, and promotions.